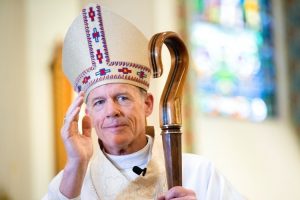 At 1:00 p.m. Mountain Time on Sunday, December 19th, the Archbishop of Santa Fe, John C. Wester, will hold an “Unveiling and Blessing of a Sign of Peace,” The Shrine of Our Lady of Guadalupe in downtown Santa Fe, New Mexico at the intersection of Guadalupe and Alameda Streets. 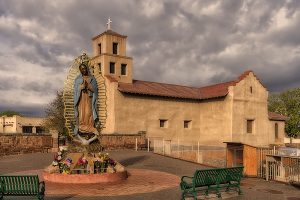 https://archdiosf.org/events/the-unveiling-and-blessing-of-a-sign-of-peace  It will be held in the open, so attendees should dress warmly and observe COVID protocols of masking and social distancing.  In keeping with the tradition of Our Lady of Guadalupe, attendees are encouraged to bring a rose, as well as their hopes, prayers and aspirations for a peaceful world.  https://santuariodeguadalupesantafe.com/  It will also be live-streamed at https://nukewatch.org/

Archbishop Wester will unveil this sign to initiate a conversation on nuclear weapons disarmament as a critical step toward world peace.  He believes the Archdiocese of Santa Fe has a special role to play in facilitating this urgent dialogue.

The location has added significance because, less than 100 yards away, Los Alamos National Laboratory is leasing an office building for its expanding work force, as it ramps up production of plutonium pits, or cores, for new nuclear weapons.  This is part of the accelerating nuclear arms race, arguably more dangerous than the Cold War. http://chriswebster.com/images/SFprop/Commercial/100_Guadalupe01sm.jpg

On January 20, 2021, two days before the entry into force of the Treaty on the Prohibition of Nuclear Weapons, also known as the Nuclear Weapons Ban Treaty, Pope Francis spoke at the Vatican, appealing to all nations to work toward a world without nuclear weapons. 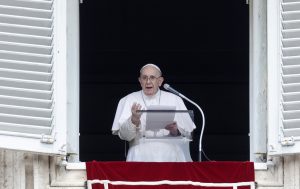 The Vatican was the first state to sign and ratify the Treaty on September 20, 2017.  https://www.vatican.va/content/francesco/en/audiences/2021/documents/papa-francesco_20210120_udienza-generale.html

The Treaty was the first legally binding international agreement to prohibit signatory states from developing, testing, producing, stockpiling, stationing, transferring and using or threatening to use nuclear arms.  The Treaty reached the required 50 signatures in October 2020.  At present 58 states are participating.  https://www.icanw.org/

These countries seek to ban the bomb 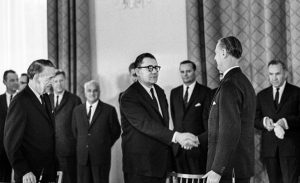 just as chemical and biological weapons have been banned. They began negotiating the ban treaty in 2015, 45 years after the 1970 Nuclear Non-Proliferation Treaty when the nuclear weapons states of the U.S., Russia, the U.K., France and China had promised to work “in good faith” for nuclear disarmament.  https://www.un.org/disarmament/wmd/nuclear/npt/  The non-nuclear weapons states foresaw a time when nuclear weapons also would become legally taboo.

In his January 2021 appeal, Pope Francis shared his vision of a world without nuclear weapons, adding that this may best be accomplished by “contributing to the advancement of peace and multilateral cooperation, which humanity greatly needs.”

1. Your financial support is greatly appreciated

Get your comments in to the NM Environment Department about DOE’s plans to change the levels of volatile organic compounds (VOCs) in Panel 8 at the Waste Isolation Pilot Plant (WIPP). Your comments will make a difference! A sample public comment letter you can use is available at  http://nuclearactive.org/public-comments-needed-for-public-hearing-on-wipp-panel-8/ 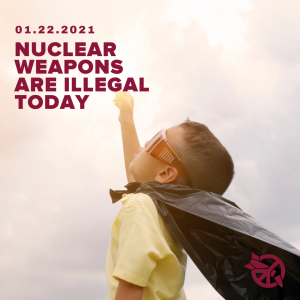 First Anniversary Celebration of the Treaty on the Prohibition of Nuclear Weapons!!! Join Veterans for Peace, CCNS, Nuclear Watch NM and others to celebrate and commemorate the first anniversary of the entry into force of the Treaty!!!   As we get closer to the event, more information will be available.