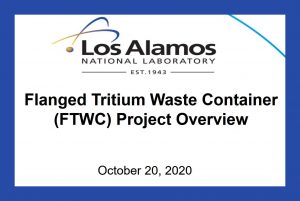 Due to the myriad of technical flaws that occurred during the October 20th virtual meeting on the proposed and controversial venting of 114,000 Curies of radioactive tritium from Los Alamos National Laboratory (LANL), the Department of Energy (DOE) committed to holding a second virtual meeting.  It may be held as early as next Tuesday, October 27th.  CCNS will post alerts on our social media network once a date and time has been determined. 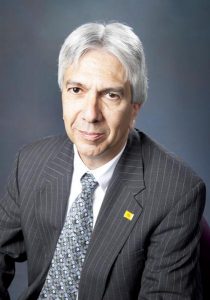 Over 150 people attended the virtual meeting.  Many people left early due to the uncontrollable feedback and a variety of problems with the powerpoint.  The session was recorded.  If requested, the session will be translated into Spanish.  The PowerPoint and other information are available at https://www.lanl.gov/environment/ , under “Resources.”

Pete Maggiore, a Senior Advisor and Acting DOE Assistant Manager at LANL, hosted the meeting.  The meeting was held only to receive public comments and questions.  DOE did not provide responses.  Maggiore hoped to respond to all comments in writing before the next virtual meeting.

He described the four Flanged Tritium Waste Containers, called FAT WACS, which are about 51-gallon stainless steel pressure vessels.  One FAT WAC can hold four to five smaller containers, called AL-M1s.  Watkins said only the gas in the larger container, or the headspace gas, would be vented.

After Watkins’ presentations, those who wanted to speak were given two minutes each.  Jay Coghlan, of Nuclear Watch New Mexico, observed that an analysis of alternatives to the venting has not been publicly released and that the New Mexico Environment Department has not seen it.  https://nukewatch.org/

Beata Tsosie, Coordinator of Tewa Women United’s Environmental Health and Justice Program, said she does not consent to the continuing desecration of her homelands and ancestral sites.  Because there is no safe level of exposure for tritium, Tsosie expressed her concern for pregnant women being exposed to the vented tritium.  She suggested that Indigenous and western technology and science come together to figure our how to cleanup LANL’s radioactive, toxic and hazardous waste mess.  https://tewawomenunited.org/

Cynthia Naha said that the federal government had not fulfilled its trust responsibilities to the Pueblos as evidenced by the fact that the downstream Pueblos of Cochiti, San Felipe, and Santa Ana had not heard anything about the proposed venting. 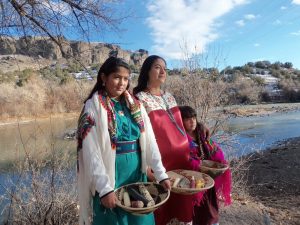 Dee Finney, a public health nurse living 20 miles downwind of LANL, expressed concern about emergency preparedness and notification procedures during the pandemic. She asked whether there is an evacuation plan.  She also asked to see the analysis of alternatives to venting.

Leona Morgan, a co-founder of the Albuquerque-based Nuclear Issues Study Group, said she does not consent to the venting, which she described as an example of environmental racism.  https://www.facebook.com/NuclearIssuesStudyGroup/

Carol Miller, a public health advocate, summarized the feelings of many of the commenters by saying, “We don’t want it.”

Cindy Weehler, a retired chemistry teacher, said that while LANL claims it is a “world class laboratory,” the virtual meeting was operated like the Keystone Cops.  She pointed to LANL’s failure in allowing the drums to become pressurized and said the penalty should belong to LANL.  She said, “This is your fault, not the public’s.  Someone at LANL made a poor decision,” and LANL needs to make decisions now that won’t harm the public. 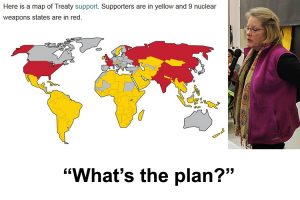 Joni Arends, of CCNS, asked what plan LANL has for when the international Treaty on the Prohibition of Nuclear Weapons goes into effect. https://www.un.org/disarmament/wmd/nuclear/tpnw/

Forty-seven nation states or countries have signed and ratified the Treaty – only three more are needed for it to go into effect.  https://www.icanw.org/

The Treaty was modeled after the Convention on the Prohibition of the Use, Stockpiling, Production and Transfer of Anti-Personnel Mines and on Their Destruction (or Mine Ban Convention) https://www.un.org/disarmament/convarms/landmines/

and the Convention on the Prohibition of the Development, Production, Stockpiling and Use of Chemical Weapons and on Their Destruction https://www.un.org/disarmament/wmd/chemical/  , which challenged countries that still possessed those weapons.  Arends asked how LANL would address the economic harm that could occur to the workers, families and communities that have supported LANL once the Treaty goes into effect.  She asked again, “What’s the plan?”  http://nuclearactive.org/

To submit your comments electronically to LANL, email FTWC_publicinfo@lanl.gov.

The Department of Energy and WIPP asked for the reissuance of the 180-day temporary authorization.  What will NMED do?  Violate the procedural due process rights of groups like CCNS who asked for a public hearing about the new shaft?  or proceed ahead with DOE/WIPP requests for reissuance of the temporary authorizations for another 180 days?  Comments to the NMED Hazardous Waste Bureau Chief Kevin Pierard – Kevin.Pierard@state.nm.us

To register for the public meeting:  https://www.epa.gov/nm/forms/registration-form-virtual-public-meeting

To register for the public hearing – which is required by Friday, October 23rd if you want to submit an oral statement and data about the proposed permit: https://www.epa.gov/nm/forms/registration-form-virtual-public-hearing

Public comments due on Monday, November 2nd – see No. 5 below.