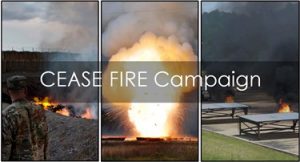 The grassroots Cease Fire Campaign secured a powerful victory to protect the health of communities surrounding Department of Defense sites that use open burning as a disposal method for conventional munitions and hazardous waste last week when President Obama signed the 2017 National Defense Authorization Act.  The Act requires a National Academies of Science study and broadened the list of alternatives.  http://cswab.org/congress-requires-military-to-pursue-alternatives-to-burning-munitions/  By 2020, it is estimated the U.S. will have 1.1 million tons of munitions in need of disposal.

Surrounding communities have found their air and drinking water contaminated with dioxins, furans, perchlorate, chlorinated solvents, and toxic heavy metals, including chromium, uranium, depleted uranium and lead, among other hazardous and toxic materials.  In order to provide alternatives technologies to open burning, the Act allows the Army to use cost-competitive technologies to “minimize waste generation and air emissions as alternatives to disposal by open burning, open detonation, direct contact combustion, and incineration.”  https://www.gpo.gov/fdsys/pkg/BILLS-114s2943enr/pdf/BILLS-114s2943enr.pdf, p. 74.

Craig Williams, program director of the Kentucky Environmental Foundation, a member group of the Cease Fire Campaign, calls open burning “a very primitive and dangerous practice.” http://www.kyenvironmentalfoundation.org/  Open burning is similar to using a backyard burn barrel when it is filled with trash and lit on fire.  The smoke and ash can contain hazardous pollutants, including particulate matter, mercury, and arsenic.  https://www.env.nm.gov/aqb/projects/openburn/documents/BackyardBurningBrochure.pdf

In the 1970s, the federal government prohibited open burning of hazardous waste, except for waste explosives.  The military and national laboratories argued that there were no alternatives and requested the exemption.  Nevertheless, alternatives are available, such as confined burn facilities, detonation chambers, gas phase reduction, and a process using water, high pressure and temperature, called supercritical water oxidization.

As a result of the Campaign’s work, the Act also requires the National Academy of Sciences to conduct a study of alternatives to open burning, with a report due to Congress in 18 months.  https://www.gpo.gov/fdsys/pkg/BILLS-114s2943enr/pdf/BILLS-114s2943enr.pdf, p. 571. 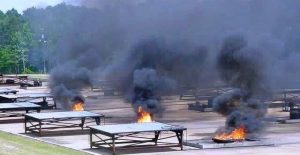 Munitions include small arms cartridges, mortars, artillery shells, rockets, tactical missiles, propellants and other wastes.  In New Mexico, Los Alamos and Sandia national laboratories use open burning for disposal of explosives and hazardous wastes contaminated by explosives.  At LANL, a 1981 memo reveals that up to 136,000 pounds of waste explosives a year were disposed of by open burning.  http://lahdra.org/pubs/Final%20LAHDRA%20Report%202010.pdf, p. 19-10.

The Cease Fire Campaign, a project of the Wisconsin-based Citizens for Safe Water Around Badger, works to ensure the safe disposal of the conventional munitions stockpile and other hazardous waste.  Sixty environmental, labor, veterans and social justice organizations, including CCNS, are part of the nationwide Campaign.  http://cswab.org/resources/cease-fire-campaign/

Joni Arends, of CCNS, said, “The National Academy of Sciences report will support our campaign to protect downwind and downstream communities from open burning at LANL.”