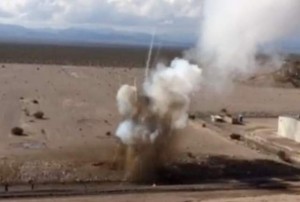 On Sunday, October 18th, 2015, after receiving nearly two inches of rain that seeped into the Beatty dump, heavily corroded 55-gallon drums containing metallic sodium exploded, releasing hydrogen gas and sending buried drums into the air, which landed nearly 200 feet from crater that was created. Plumes of white smoke also were seen coming from the dump. The deflagration was so hot that other waste materials caught fire and burned for two days. http://www.reviewjournal.com/news/fire-rescue/video-shows-blasts-nuclear-waste-dump-site-shut-down-us-95

At the time, officials declared that there was no release of radioactive materials. On December 30th, 2015, the Nevada State Fire Marshall released its 309-page investigation report that concluded, “[T]he incident was caused by water that made contact with sodium metal in the trench area and formed an exothermic reaction with resulting fire.” Fire Marshal Report, Beatty Industrial Fire Incident Report 12/30/2015 and http://lasvegassun.com/news/2015/nov/27/fire-marshal-seeping-water-caused-radioactive-dump/

In a recent email to Environment Department Ryan Flynn, Citizen Action New Mexico detailed the similarities of the dumps and requested, for the protection of the Albuquerque community, that the Mixed Waste Landfill be excavated now.

Both dumps are located in desert environments. Waste disposal began in the early 1960s in unlined trenches. Radioactive and hazardous waste were buried in steel drums, wood crates and cardboard boxes. Both dumps are currently closed and have dirt covers. Over the decades, deterioration of the packaging materials created void spaces, causing collapses and cracking the dirt cover.

Because metallic sodium reacts to water, it is packed in oil. The Nevada State Fire Marshall found that over time, the steel drums corroded allowing the packing oil to leak out, exposing the metallic sodium to the dump’s environment. Further, the rain infiltrated into the dump through the “compromised earth cover … causing an exothermic reaction between the water and metallic sodium.”

Citizen Action New Mexico wrote that Sandia’s “metallic sodium was inseparably combined with high-level fission products from nuclear meltdown testing at Sandia’s [Annular Core Research Reactor (ACRR)] nuclear reactor…. The consequences of explosions and fires in Albuquerque could be much greater than at the US Ecology site, which is 11 miles distant from the small town of Beatty, Nevada. Evacuation of I-25, I-40, Isleta Pueblo, the Sunport, Mesa del Sol, the VA Hospital and Kirtland Air Force Base and Sandia Labs could be necessary…. Ignoring the problem and denying there is a problem won’t fix the problem.”