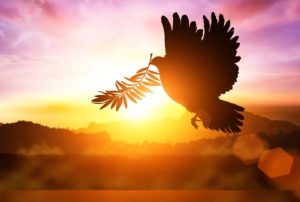 Under the banner of “Diplomacy is the Path to Peace,” non-governmental organizations, faith-based groups, individuals and others are gathering for nationwide activities the week of December 19th to end the war in Ukraine, not life on Earth.  https://defusenuclearwar.org/ 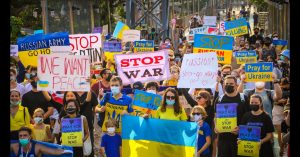 Defuse Nuclear War is promoting the nationwide action as one effort to reach the public and pressure key elected officials to use diplomacy as the path to peace.  They are encouraging people around the country to send photos of loved ones and others, whose futures are at stake, to the White House as well as to their senators and representatives.

Defuse Nuclear War.org will provide digital tools and links to facilitate the process to make it easy for people to send photos and accompanying messages to President Biden and members of Congress encouraging genuine diplomacy and measures to prevent nuclear war. 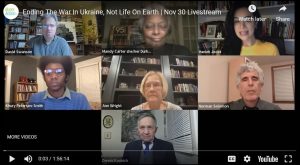 In New Mexico, Veterans for Peace, CCNS, Nuclear Watch New Mexico, and other New Mexico non-government organizations will be joining together to organize events as we did for the Cuban Missile Crisis 60th anniversary on October 14th.  The groups met with staffers from Senator Martin Heinrich’s office about the need to defuse nuclear war.  They emphasized their demands to end the policy of “first use,” rejoin nuclear weapons treaties the U.S. pulled out of, take U.S. nuclear weapons off hair-trigger alert, get rid of the land-based ICBM nuclear missiles, support congressional action to avert nuclear war, and move the money to human needs, not war.   https://defusenuclearwar.org/learn/

Veterans for Peace member Bob Josephs recounted his experience during the Cuban Missile Crisis as a young Air Force officer near Izmir, Turkey; he was in charge of three nuclear-armed Jupiter missiles kept on hair-trigger alert.  Josephs explained, “I later learned that these missiles were the provocation for Khrushchev stationing Soviet missiles in Cuba.  Robert McNamara, Defense Secretary under Kennedy, said we avoided nuclear war only by luck.  A better plan than just plain dumb luck is to verifiably eliminate nuclear weapons as we pledged to do long ago in the 1970 Non-Proliferation Treaty.” 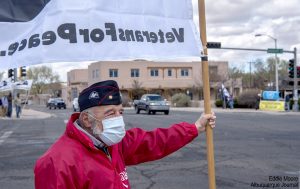 To learn more, please join Veterans for Peace, CCNS, Nuclear Watch New Mexico, the Loretto Community, Pax Christi and others in Santa Fe at noon on Fridays for a one-hour peaceful protest at the corners of Alameda and Guadalupe.

In further support of the need to eliminate nuclear weapons, check out the two powerful, yet short podcasts https://defusenuclearwar.org/podcast/ and videos https://defusenuclearwar.org/watch-videos/ with Daniel Ellsberg.    Directed by Oscar-nominee Judith Ehrlich, the series explores the dangers of nuclear weapons and the politics that drive their existence.  Hear firsthand accounts from Ellsberg about his time as a nuclear war planner for the U.S. military and learn hidden truth about realities of nuclear weapons. 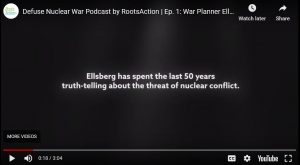 In episode 2, Daniel Ellsberg makes the case for the U.S. eliminating hair-trigger intercontinental ballistic missiles (ICBMs) that cannot be called back and are vulnerable to attack.

Defuse Nuclear War is a joint endeavor of RootsAction.org and the RootsAction Education Fund.

Register in advance for this meeting by clicking here: https://us02web.zoom.us/meeting/register/tZUrceyqqTIsHdK60QSqg7dzuHzS7nYpBKFj