The Defense Nuclear Facilities Safety Board will hold a public hearing about reducing the risk of current and future plutonium inventories at the Los Alamos National Laboratory (LANL) Plutonium Facility on Wednesday, June 7th at the Santa Fe Community Convention Center, beginning at 5 pm.  A public comment period begins at 8:30 pm.  To pre-register to speak during the public comment period, please email your request to hearing@dnfsb.gov or contact the Office of the General Counsel at (202) 694–7062 or (800) 788-4016.  Individuals may also submit written comments both prior to and at the hearing.

The Plutonium Facility is the only place in the United States where plutonium triggers for nuclear warheads are manufactured.  Operations have been down for almost three years due to criticality issues, but are expected to ramp up again.  http://www.lanl.gov/about/operational-excellence/facilities/ta-55-plutonium-processing-facilities.php

Operations began at the Plutonium Facility in 1978.  It is located in wildfire and seismic zones, above surface and ground water drinking water supplies.   For decades, the independent federal Board raised issues about amount of plutonium that could be released into the environment by an earthquake and resulting fire.  Because of the Board’s attention and the seismic analyses by Robert H. Gilkeson, an independent registered geologist, limits on the amount of weapons grade plutonium that could be located on the first floor of the facility were reduced from 5 metric tons in 2008 to 1.8 metric tones in 2012.  See Gilkeson Seismic Documents at http://nuclearactive.org/gilkeson/, specifically the August 20, 2013 report to the Board. 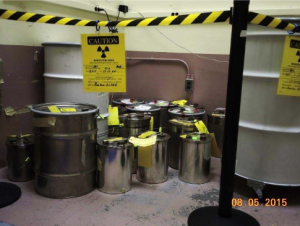 Nevertheless, further efforts to reduce the amount of plutonium have not been a priority.  Work has been stifled by the lack of funding and decades’ long timelines to complete the work.  A 2015 Board report documents plutonium that could be stored in existing robust vaults is found in uncertified containers on the floor, of which 20 percent has been there for five or more years.  https://www.dnfsb.gov/sites/default/files/meeting/TECH-39.pdf

The hearing is timely because last week the Trump Administration proposed a $210 million increase to expand plutonium trigger manufacturing at LANL in fiscal year 2018, which begins October 1, 2017.

Further, on Wednesday, April 19th a fire broke out in the Plutonium Facility when three workers placed the contents of unlabeled waste containers into a plastic bag.  The mixture contained pyrophoric materials that spontaneously ignited when exposed to air.  A fire ensued.  One worker received second-degree burns to both hands after placing the bag into a metal container located on a metal cart.  He pushed the cart toward the front of the room, away from the glove boxes where plutonium is handled, and snuffed out the fire with a handheld fire extinguisher.  Board April 21, 2017 Weekly Report about “Plutonium Facility – Fire Event,” at   https://www.dnfsb.gov/sites/default/files/document/11556/Los%20Alamos%20Week%20Ending%20April%2021%2C%202017.pdf and May 25, 2017 LANL letter to New Mexico Environment Department regarding “Transmittal of Additional Information Regarding Emergency Treatment at TA-55” at http://permalink.lanl.gov/object/tr?what=info:lanl-repo/eprr/ESHID-602410

The Board’s goal is to gather information from experts and the public about the risks of current plutonium inventory levels, and actions taken to reduce current and long-term operational risks.

For more information, please see https://www.dnfsb.gov/public-hearings-meetings/understanding-safety-posture-plutonium-facility-los-alamos-national  See “Documentation” that is relevant to the hearing, including the September 2015 DNFSB Technical Report, “Opportunities for Risk Reduction at the Los Alamos National Laboratory Plutonium Facility Through the Minimization of Material-at-Risk,” DNFSB/TECH-39.