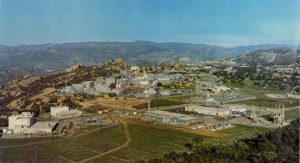 The truth was revealed at an August 17th, 2016 public meeting that the Department of Energy (DOE) provided a secret $34,000 grant to the Community Advisory Group (CAG) for the Santa Susana Field Laboratory, a front group created to breach the DOE’s cleanup agreement for the contaminated nuclear reactor research and rocket test facility located on 2,850 acres in the California hills above the San Fernando and Simi Valleys in Ventura County.  20160831 Rocketdyne Cleanup Coalition Press Release and 20160829 PSR-LA to DOE Regalbuto CIF Scandal The Department of Energy (DOE), the National Aeronautics and Space Administration (NASA) and the Boeing Corporation own the facility.  Elevated cancer rates have been found in neighboring communities. http://www.rocketdynecleanupcoalition.org/ssfl-cleanup-frequently-asked-questions/

For more than 20 years, the effective Santa Susana Field Laboratory Work Group met monthly and included representatives from Physicians for Social Responsibility – Los Angeles.  http://www.psr-la.org/issues/peace-and-security/cleaning-up-the-santa-susana-field-laboratory/ They developed expertise about the contamination, pathways for exposure, elevated cancer rates, and cleanup.  They educated their elected officials who then took action.  Julia_Brownley_Linda_Adams_March_9_of_2009

In the late 1990s, as part of a national settlement with community groups about cleanup at its sites, DOE established an independent funding mechanism to provide technical grants to non-profit organizations working on cleanup.  http://www2.clarku.edu/research/kaspersonlibrary/mtafund/ In its latest iteration, a five-year, $5 million dollar fund, called the Community Involvement Fund, or CIF, was established and was independently administered by the New Mexico Community Foundation.  http://cif.nmcf.org/about/ In August 2015, DOE abruptly stopped funding the CIF, after providing less than $2 million.

At the same time, DOE secretly provided a $34,000 “no strings” grant to the new front group, the Santa Susana Field Laboratory Community Advisory Group, comprised of officials of DOE and its contractors.  The funding was apparently secret so that U.S. Senator Barbara Boxer, a proponent of the cleanup, would not challenge the grant.

At the recent August 17th, 2016 meeting, Community Advisory Group member Alec Uzemeck revealed that DOE would soon release a report with a list of grants, and “DOE is the one that made the grant for us.  They are the one who supplied the funding.”  https://www.youtube.com/watch?v=h3XlYNdVPIo&feature=youtu.be&t=1m35s

Renee Villarreal, Director of Programs and Community Outreach for the New Mexico Community Foundation, was disappointed to hear the news from one of their grantee partners about this discovery.  She said, “Nontransparent funding decisions by DOE and lack of accountability for cleanup was specifically the reason why the CIF program was created in the first place.”

Villarreal continued, “It’s frustrating to learn that while [the New Mexico Community Foundation] was trying to get the CIF funding reinstated that was anticipated for the last year of the program, there was funding going to a group that is essentially undermining the cleanup commitment at Santa Susana.  It is obvious that DOE funding mechanisms are not transparent, and this kind of activity sends a clear message to communities dealing with legacy waste contamination, that DOE is not prioritizing their health and safety”.

DISCLOSURE:  CCNS received funding in 2003, 2004 and 2007 to produce the following reports, which are available at:  http://www2.clarku.edu/research/kaspersonlibrary/mtafund/in