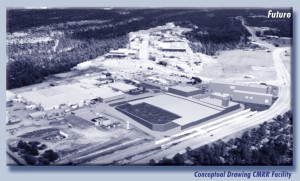 In a weekly report for Los Alamos National Laboratory (LANL), the Defense Nuclear Facilities Safety Board revealed that the U.S. Department of Energy (DOE) and the semi-autonomous National Nuclear Security Administration (NNSA) have given themselves permission to significantly increase the amount of plutonium allowed in the Chemistry and Metallurgy Research Replacement (CMRR) Project radiological laboratory from 8.4 grams to 400 grams, a 46-fold increase, without supplementing their environmental impact statements as required by the National Environmental Policy Act (NEPA). http://www.dnfsb.gov/sites/default/files/Board%20Activities/Reports/Site%20Rep%20Weekly%20Reports/Los%20Alamos%20National%20Laboratory/2015/wr_20151218_65.pdf The increase is substantial and NEPA requires the federal nuclear weapons agencies supplement their environmental impact statement, with opportunity for public review and comment, as well public hearings. 40 CFR §1502.9(c).

The amount of plutonium is measured in weapons grade plutonium-239 equivalents. Eight grams is about one-third of an ounce, whereas 400 grams is equivalent to a little more than 14 ounces, or nearly a pound.

In 2003, the federal agencies proposed the $600 million CMRR Project with the release of a draft environmental impact statement.   Public hearings were held in Northern New Mexico, with the majority of commenters opposing the proposed project that would increase the manufacture of plutonium triggers for nuclear weapons from 20 per year to 50 to 80 per year. Despite public opposition, the federal agencies decided to proceed with construction and operation of two buildings, the Radiological Laboratory, Utility and Office Building (RLUOB) and the Nuclear Facility.

The RLUOB was designed and built as an office and utility building, with radiological labs in the basement for the limited use of 8.4 grams of plutonium. The Nuclear Facility was not built and eventually President Obama put it on a five-year hold when the cost escalated to $6 billion.

The federal agencies designated the RLUOB as a radiological facility. In 2011, DOE and NNSA confirmed this fact in their final environment impact statement. They wrote, “NNSA would not operate RLUOB as anything other than a radiological facility, which would significantly limit the total quantity of [plutonium and other] special nuclear material that could be handled in the building.” http://energy.gov/sites/prod/files/EIS-0350-FSEIS_Summary-2011.pdf, at p. S-13.

Moreover, because the Nuclear Facility was not built, the federal agencies now want to raise the RLUOB radiological designation to a hazard category 3 nuclear facility in order to increase the amount of plutonium allowed. Such a designation would create more hazards and require structural modifications as well as additional safety, security and emergency preparedness measures. http://energy.gov/sites/prod/files/EIS-0350-FSEIS_Summary-2011.pdf, at p. S-13.

In response, CCNS prepared a sample comment letter that you can use – and modify as you see fit – to demand that the federal agencies supplement their environmental impact statement as required by NEPA. Click HERE to download the PDF file.