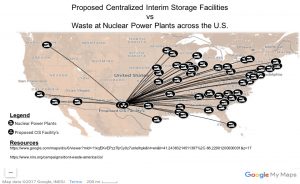 In response to a request from U.S. Senators Tom Udall and Martin Heinrich for more opportunities for New Mexicans to provide input into a Holtec International proposal to bring all of the existing commercial high-level 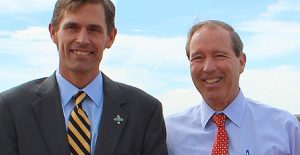 radioactive spent fuel to New Mexico, the Nuclear Regulatory Commission (NRC) announced two more scoping meetings.  http://nuclearactive.org/wp-content/uploads/2018/04/ATT00030.pdf  The first meeting will be held in Gallup on Monday, May 21st from 6 to 9 pm at the Gallup Downtown Conference Center, located at 204 West Coal Avenue.  https://adamswebsearch2.nrc.gov/webSearch2/view?AccessionNumber=ML18129A378  The second meeting will be held in Albuquerque on Tuesday, May 22nd from 6 to 9 pm at the Crowne Plaza, located at 1901 University Boulevard, from 6 to 9 pm.  https://adamswebsearch2.nrc.gov/webSearch2/view?AccessionNumber=ML18129A383  Both meetings will begin with an open house from 5 to 6 pm.

Attendance at these meetings is important so that New Mexicans can tell the NRC that we do not consent to the proposed Holtec project.  Dozens of people stated so at the previous meetings in Roswell, Hobbs, and Carlsbad.

The 960-acre proposed site, containing playa lakes, is located half way between Hobbs and Carlsbad.  Holtec, a limited liability corporation, is asking NRC for a 40-year license to store the waste in Lea County, with an opportunity to extend the license to 120 years.  Holtec stated in its license application that the waste could be stored there for 300 years.  https://www.nrc.gov/site-help/search.html?q=holtec&site=allSites#gsc.tab=0&gsc.q=holtec&gsc.page=1  Over 10,000 overweight

rail cars would carry the dangerous waste from across the country to the proposed site and the waste would likely travel very near to the Carlsbad sinkhole.  http://nonuclearwasteaqui.org/

Many along the national transportation routes are concerned that NRC has not provided the same number of meetings as they did for the proposed Yucca Mountain site in Nevada.  On Wednesday, an environmental coalition submitted a petition to NRC arguing that additional meetings in major cities hard hit by high-risk road, rail, and/or barge shipments of the irradiated nuclear fuel are needed. Click HERE to view the PDF file.

They wrote, “The possibility of a spent fuel leak, explosion, criticality or canister breach in any of these urban areas, and the questions of whether and how much Americans and the environment should bear the risks of this massive scheme, should be decided in a process that is truly national, visible and far more extensive.” 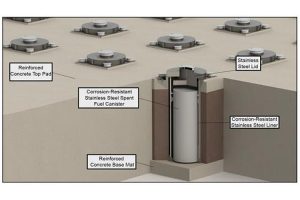 Dr. Fred Dilger, on behalf of the State of Nevada Agency for Nuclear Projects, in the context of the Yucca Mountain permanent burial dump proposal, prepared road and rail route maps.  http://www.state.nv.us/nucwaste/whatsnew.htm  The maps are instructive regarding the Holtec proposal.  The further east, or west for that matter, from New Mexico, the more similar, or identical, would be the routes, by rail or road, between the Nevada and New Mexico schemes.  The Dilger routing analyses show that 44 states, scores of major cities, and 330 of the 435 congressional districts, would “host” road and/or rail routes for highly radioactive irradiated nuclear fuel truck and/or train transport to Nevada.