Halt Holtec! No Consent at Gallup and Albuquerque NRC Meetings 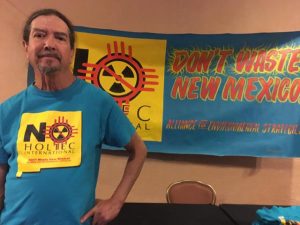 Noel Marquez of Artesia, cofounder of the Alliance for Environmental Strategies, wears a t-shirt reading “No Holtec International” during a public meeting on Tuesday in Albuquerque. (Maddy Hayden/Journal)

Once again, dozens of New Mexicans stated emphatically that they do not consent to the proposed Holtec International project to bring all of the commercial high-level radioactive waste from nuclear reactors located across the country by rail to a site in southeast New Mexico for storage.  Holtec applied for a 40-year license from the Nuclear Regulatory Commission (NRC) to store the waste in a proposed consolidated interim storage facility located half way between Carlsbad and Hobbs.  If granted, the 40-year license could be extended to 120 years.  Holtec stated in its license application that the waste could be stored there for 300 years.  The NRC held meetings in Roswell, Hobbs, Carlsbad, Albuquerque, and Gallup, asking for public input into the “scope” of the environmental impact statement they are preparing.

On Monday, May 21st, over 100 individuals attended the Gallup meeting.   Of the 37 speakers, 36 opposed the transportation of the waste through their region.  Navajo Nation Council delegate Jonathan Perry and New Mexico Representative Stephanie Garcia Richard supported The People and spoke in opposition.

There are over 14 Navajo communities along the proposed Interstate 40 transport route.  NRC has not scheduled any public meetings in those communities.  Additional meetings, with translators and interpreters, are needed to provide the communities with all sides of the debate.  Spent uranium to go through city

On Tuesday, May 22nd, just over 200 people attended the NRC meeting in Albuquerque.  Of the 69 speakers, 63 shared their opposition with factual eloquence.  There were current and former city and state elected representatives, as well as safety and security experts speaking in opposition.  Only six people spoke in favor.  https://www.abqjournal.com/1175583/holtec-project-opposed-by-many-during-public-meeting.html

Robin Seydel, one of the grassroots organizers in opposition to the Holtec proposal, reported, “On Monday evening, May 21st, the Albuquerque City Council passed a memorial, introduced by Councilor Patrick Davis, entitled, “Opposing Transportation of High-Level Radioactive Waste Via Railway through the City of Albuquerque for the Purpose of Temporary Consolidated Storage of Radioactive Waste in New Mexico.” 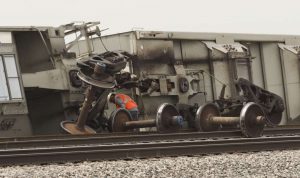 The memorial begins, “Whereas, the City owns and operates a number of Community Centers, Health and Social Services Centers, Senior/Fitness Centers, and Multigenerational Centers throughout the City; and Whereas the City of Albuquerque is committed to protecting the health, welfare, safety, and security of its residents….”  It then details the danger of shipping the waste by rail.

With tremendous public support, the City Councilors took their duties to protect the public seriously and concluded the memorial by stating the Albuquerque City Council “opposes the transportation of high-level radioactive waste, including Holtec’s ‘spent’ nuclear reactor fuel, on our railways through the City of Albuquerque for the purpose of temporary consolidated storage of high-level radioactive waste in New Mexico.”  https://cabq.legistar.com/LegislationDetail.aspx?ID=3495456&GUID=DCABFA0F-F6B1-40F1-B244-54F3429F38A5&Options=ID|Text|&Search=MEMORIAL+1

To learn more and to help protect New Mexico from this life-threatening proposal, please visit the Halt Holtec Facebook page at https://www.facebook.com/HaltHoltec as well as http://nonuclearwasteaqui.org/, Beyond Nuclear at http://www.beyondnuclear.org/, and the Nuclear Information and Resource Service at https://www.nirs.org/ .

Sidebar: On May 3, 2018, Nick Maxwell, a New Mexico resident, filed a Declaration, Notice and Demand with the Eddy-Lea Energy Alliance alleging the notice for the September 26, 2016 ELEA meeting did not meet the requirements of the New Mexico Open Meetings Act, Section 10-15-1 NMSA 1978.  OMA-Violation-Notice-ELEA