(THEME UP AND UNDER) This is the CCNS News Update, an overview of the latest nuclear safety issues, brought to you every week by Concerned Citizens for Nuclear Safety. Here is this week’s top headline:

The New Mexico Environment Department recently granted a preliminary determination that Sandia National Laboratories have completed all cleanup requirements for the Mixed Waste Landfill, as part of its hazardous waste permit.  According to Citizen Action New Mexico, who has actively worked for excavation of the unlined dump, the cleanup has not been completed and the determination is premature. In fact, they say, the Cold War era nuclear weapons dump should be dug up because it is leaking and threatens Albuquerque’s drinking water aquifer.

The Mixed Waste Landfill is a 2.6-acre dumpsite that contains an estimated 1,500,000 cubic feet of radioactive and mixed hazardous wastes from reactor meltdown experiments and the research and development of nuclear weapons. Plutonium, americium, tritium, depleted uranium, lead, beryllium, PCBs and chlorinated solvents were disposed there. The waste lie above Albuquerque’s drinking water aquifer in plastic bags, cardboard boxes and steel drums. Sandia officials cannot state what is in the dump. In 2009, a dirt cover was applied to the site.

The Environment Department, in its approval letter, says that Sandia may submit an application to modify its hazardous waste permit to reflect the change. But the change subjects Sandia to provide the public with a notice of the change, along with an opportunity to provide comments and request a public hearing. Given the amount of public interest in the dump, inevitably, there would be a public hearing. Further, the Environment Department reserves its rights to require additional cleanup if it receives new information through the public comment process.

Sandia requested the change after the Environment Department approved the Long-Term Monitoring and Maintenance Plan in January. The plan describes the types of monitoring and maintenance that will be conducted, along with contingency procedures that will be implemented when the dirt cover fails and is no longer protective of human health and the environment.

That plan is now the subject of litigation brought by Citizen Action against the Environment Department.  http://www.radfreenm.org/  In May 2005, when the Environment Department approved the Final Cleanup Order, it required that every five years Sandia review whether excavation is feasible, update the fate and transport model, conduct an evaluation of pollution reaching groundwater, and make it publicly available. Sandia has not conducted the required five-year review, even though one was due in 2010. Now the Long-Term Monitoring and Maintenance Plan allows the five-year review to deferred so that the first review would take place in 2019.

Unfortunately, the combination of cleanup approval, along with further delays of the five-year review, means that pollution will continue to migrate to Albuquerque’s drinking water aquifer.

This has been the CCNS News Update. To learn more, please visit our website at nuclearactive.org. 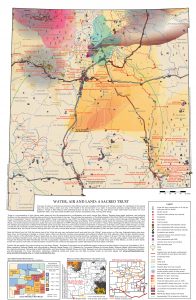