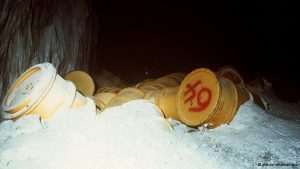 Nuclear Watch New Mexico amended its complaint against the U.S. Department of Energy and Los Alamos National Security, LLC, which alleges twelve cleanup violations of the 2005 Consent Order issued by the New Mexico Environment Department for Los Alamos National Laboratory (LANL), asking the federal court to invalidate the recently issued Consent Order because the Department did not hold a formal public hearing as required by federal and state hazardous waste laws and regulations.  http://nukewatch.org/importantdocs/resources/NukeWatch-First-Amended-Complaint-as-filed-20160719.pdf

The U.S. Department of Energy (DOE) is the owner of LANL, and the Los Alamos National Security, LLC, (LANS), a privately held corporation, is the management contractor responsible for the cleanup work.

The 2005 Consent Order required cleanup of LANL by December 6, 2015, a deadline that was not met.  The 2016 Consent Order does not have a final compliance date.  https://www.env.nm.gov/HWB/lanlperm.html  It is open-ended and creates huge loopholes which allows DOE and LANL to declare that cleanup is too expensive or impractical.  This would result in radioactive and hazardous waste that is already leaking into the groundwater to be left in place.

The regulations, which were explicitly incorporated into the 2005 Consent Order, require that anytime a final compliance date is changed, the opportunity for a public hearing is available.  The new Consent Order does not provide a final compliance date.  Nuclear Watch argues that DOE and the Environment Department violated the public’s due process rights by not holding a formal hearing.

Holding a formal hearing allows the public the opportunity to present technical testimony, to cross-examine DOE, LANS and Department witnesses, and following the hearing, to prepare findings of fact and conclusions of law.  The public also has the opportunity to appeal the final decision to the New Mexico Court of Appeal.  Despite early assurances that the Department would hold a public hearing, the DOE and the Department agreed in the new Consent Order that there would be no hearing.

Further, on June 23, 2016, the Environment Department intervened in the case on the defendants’ side of DOE and LANS.  The next day, the Environment Department and DOE signed the 2016 Consent Order following a 60-day comment period.  Over 40 citizens, non-profit organizations, public officials and two Pueblos submitted comments.  CCNS and independent registered geologist Robert H. Gilkeson also submitted extensive comments questioning the changes.

Joni Arends, of CCNS, said, “The Nuclear Watch New Mexico lawsuit is essential to ensure that the public’s due process rights are protected. There are too many examples of the Martinez Administration attempts to shortcut public participation.  This is another.  Many thanks to Nuclear Watch New Mexico and their lawyers for stepping forward to protect our rights.” 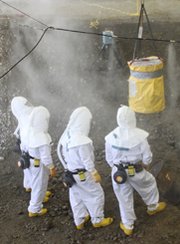 The May 5, 2016 second notice of intent to sue (which is a good summary of the complaint) is available at http://nukewatch.org/importantdocs/resources/NukeWatch-2nd-NOI-DOE-LANS-5-5-16.pdf

The January 20, 2016 notice of intent to sue is available at http://nukewatch.org/importantdocs/resources/NukeWatch-NM-NOI-to-DOE-and-LANS-20160120.pdf