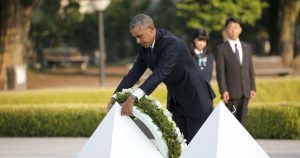 On May 27, 2016, President Barack Obama and Japanese Prime Minister Shinzo Abe laid wreaths at the Hiroshima Peace Memorial Park to mourn and honor those who died when, on August 6th, 1945, the U.S. dropped the first atomic bomb used in war on the city.  In a moving speech, Obama asked, “Why do we come to this place, to Hiroshima?”  He answered, “We come to ponder a terrible force unleashed in a not-so-distant past.”  https://www.whitehouse.gov/the-press-office/2016/05/27/remarks-president-obama-and-prime-minister-abe-japan-hiroshima-peace

Obama then recognized those who perished that day – more than 100,000 Japanese men, women and children; a dozen American prisoners of war; and thousands of Koreans, many brought to Japan as forced laborers.

He explained that the voices of the survivors, the hibakusha, “will no longer be with us to bear witness.  But the memory of the morning of August 6, 1945, must never fade.  That memory allows us to fight complacency.  It fuels our moral imagination.  It allows us to change.”

As the first sitting U.S. President to visit Hiroshima, Obama challenged us to “change our mind-set about war itself” and to look to “a future in which Hiroshima and Nagasaki are known not as the dawn of the atomic warfare but as the start of our own moral awakening.”

We challenge the President, as part of his moral awakening, to accept the invitation of the Tularosa Basin Downwinders Consortium to attend the July 16, 2016 candlelight vigil in Tularosa, New Mexico.  The event commemorates those who died, or are suffering with cancer and other illnesses, as a result of the U.S. test of the first atomic bomb at the Trinity Test Site in south central New Mexico 71 years ago, on July 16, 1945.

Tina Cordova, co-founder of the Tularosa Basin Downwinders Consortium, said, “Listening to President Obama speak in Hiroshima was in some respects bittersweet for me.  Not because I am against him acknowledging the Japanese people and their suffering.  I believe they deserve it.  I simply regret that he nor any other U.S. President has made their way to New Mexico to do the same for the people here.”

She continued, “President Obama said ‘Imagine the moment the bomb fell.’  Yes, President Obama, imagine that moment in the desert of New Mexico that forever changed our lives.  We have suffered ever since and suffer still.  It is time the U.S. government makes their way back to where the first atomic bomb was detonated and takes responsibility for the U.S. citizens that were harmed in the process.  Anything less is immoral and contrary to the ‘moral revolution’ that President Obama referred to in his remarks in Japan.”

There is a broad spectrum of opinions about President Obama’s visit to Hiroshima.  Here is a sampling:

LaFleur, Jennifer, Center for Investigative Reporting. “America’s atomic vets:  We were used as guinea pigs – every one of us,” at https://www.revealnews.org/article/us-veterans-in-secretive-nuclear-tests-still-fighting-for-recognition/

Morris-Suzuki, Tessa, Bulletin of the Atomic Scientists.  “Obama, Hiroshima, apologies, and the invisible victims of the atomic bombings,” at http://thebulletin.org/obama-hiroshima-apologies-and-invisible-victims-atomic-bombings9490

NPR Coverage, with links to listen to the speech:  http://www.npr.org/sections/thetwo-way/2016/05/27/479691439/president-obama-arrives-in-hiroshima-the-first-sitting-commander-in-chief-to-vis

New York Times.  “What Should Obama Say on His Visit to Hiroshima?” at http://www.nytimes.com/2016/05/25/world/asia/what-should-obama-say-on-his-visit-to-hiroshima.html?_r=0

Widmer, Ted, Politico.  “History Department – How Obama Will Redefine Hiroshima, A president who’s never shied away from moral complexity steps onto his most challenging stage yet,” at http://www.politico.eu/article/how-barack-obama-will-redefine-hiroshima-japan-nuclear/