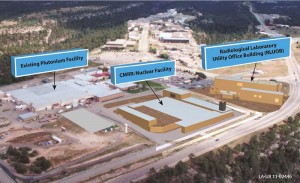 In his last proposed budget, President Obama included four projects for modernizing the existing U.S. nuclear weapons arsenal at two key facilities at the Los Alamos National Laboratory (LANL). At an estimated cost of $3 billion, the projects support the closure of the old Chemistry and Metallurgy Research Building in 2019, along with the final cancellation of the proposed super WalMart-sized Chemistry and Metallurgy Research Replacement (CMRR) Project Nuclear Facility, which the President put on a five-year hiatus in 2011. See FY17 CBR CMRR Pages from Volume 1_0-2

The two key LANL facilities are the new Radiological Laboratory, Utility and Office Building (RLUOB) at the CMRR and the almost 40-year old Plutonium Facility. The Plutonium Facility is the only Department of Energy (DOE) manufacturing facility capable of producing plutonium triggers for nuclear weapons.

In budget terms, the four projects are a “restructuring” of two projects first proposed for Fiscal Year 2016 to install new equipment in the Plutonium Facility and RLUOB.

Now the Obama Administration is proposing four projects that include the two new equipment installations, plus a phase two for installing more equipment in the Plutonium Facility. The fourth project would re-categorize the RLUOB from a Radiological Facility to a high security Hazard Category 3 facility in order to hold more plutonium than it was originally designed and built for. The canceled Nuclear Facility was to be the Hazard Category 2 facility, requiring additional security, seismic reinforcements, and a massive fire control system. The budget request does not state the cost for upgrading the RLUOB.

In 2003, DOE released a draft environmental impact statement about the CMRR Project for public review and comment. It limited the amount of plutonium allowed in the RLUOB to 8.4 grams, or about a third of an ounce.

In a January 2015 supplemental analysis to the CMRR final environmental impact statement, DOE granted itself permission to increase the amount of plutonium in the RLUOB to 38.6 grams, all without public comment and review as required by the National Environmental Policy Act (NEPA). http://energy.gov/sites/prod/files/2015/02/f19/EIS-0350-SA-02-2015.pdf

Then November 25, 2015, DOE gave itself permission to increase that amount to 400 grams, or nearly a pound, without public review and comment as required by NEPA.

Joni Arends, of CCNS, said, “The DOE has once again given itself permission to increase the potential threats and harms to the people living downwind and downstream of LANL without conducting the required NEPA analysis and review. By granting itself permission, DOE has by-passed the public review and comment period, as well as public hearings on the proposed changes.”

CALL TO ACTION! Protect the Land of Enchantment – Comments are due to the EPA’s Office of Civil Rights on Monday, March 14th by 11:59 pm Eastern Standard Time about their proposed changes to weaken their procedures and response times.  Please go to http://sacredtrustnm.org/epa-seeks-to-impede-civil-rights/ to find sample comments you can use to submit to EPA