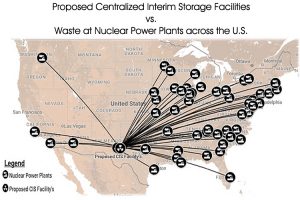 On Tuesday, June 23rd, the Nuclear Regulatory Commission (NRC) held a webinar and invited telephone comments on the Draft Environmental Impact Statement (DEIS) for a nuclear waste storage facility that Holtec proposes to build halfway between Carlsbad and Hobbs.  Holtec applied for a license to store all of the nation’s most radioactive spent fuel from commercial nuclear power plants.  Over twenty years, Holtec proposes to ship 10,000 canisters to the site by railroads, passing through more than forty states.  https://www.nrc.gov/waste/spent-fuel-storage/cis/holtec-international.html, scroll down to Environmental Impact Statement. 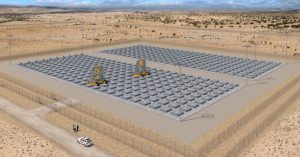 The webinar was the first comment meeting on the DEIS.  Many commenters requested that, because of the pandemic, face-to-face meetings be held after the discovery of a vaccine.  For five and a-half hours, people from more than a dozen states weighed the benefits to New Mexico of waste storage against its potential hazards and considered what it would mean for the state.

To learn more about the Holtec DEIS and the second NRC webinar on Thursday, July 9th, starting at 3 pm MDT (you have to register beforehand to speak), check out the materials prepared by the Nuclear Issues Study Group (NISG), with talking points from Sierra Club and NISG, as well as the NRC’s powerpoint presentation at https://mailchi.mp/eafed8a467ac/call-to-action-holtec-public-meeting-today-online-at-3pm-mdt

Many commenters noted that the DEIS does not adequately address transportation in New Mexico or nationwide, since it states: “Because no arrangements regarding which nuclear power plants will ship [waste]…the details regarding the specific routes that would be used also are not known at this time.”  See the April 14, 2017 Update for a listing of transportation maps.  http://nuclearactive.org/nrc-extends-public-comment-period-for-high-level-irradiated-waste-storage-at-wcs-to-april-28th/

Many commenters stated that the storage could be permanent because there is no disposal site.  They reminded the NRC that this is why the law requires that a permanent repository be selected before the designation of an interim facility like Holtec, and this has not been done. 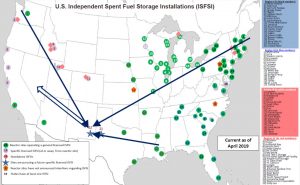 Many commenters, reflecting on racial and environmental justice, felt that New Mexico, as one of the poorest states in the nation, is being considered a “throwaway” state for waste that others don’t want.  Both James Kenney, Secretary of the Environment Department, and Sarah Cottrell Propst, Secretary of the Energy, Minerals and Natural Resources Department, found the DEIS technically inadequate for many reasons and reiterated that Governor Michelle Lujan Grisham strongly opposes the project.  NM Governor Holtec Ltr 060719

is “Human Rights over Nuclear Might.”  The New Mexico plenary will take place on Sunday, August 2nd in mid-afternoon.  Stay tuned for details.  To learn more about VFP’s National Convention, go to:   https://www.veteransforpeace.org/2020-annual-convention 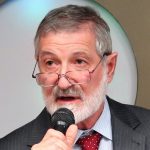 hosted by the New Mexico 75th Commemoration of Hiroshima/Nagasaki Committee and Pace e Bene. CCNS is an organizer and co-sponsor of the event.  The webinar is free.  Please register or check the website closer to the event date for more information. https://paceebene.org/hiroshimaday2020

The message is:  Nuclear disarmament must happen now!  Join the Fast!  Demand that your country signs the Treaty on the Prohibition of Nuclear Weapons!   For more information, visit http://www.abolition2000.org/event/international-fast-for-nuclear-disarmament/  or email Dominique Lalanne, <do.lalanne@wanadoo.fr>