Report from the Dismantling the Nuclear Beast Symposium 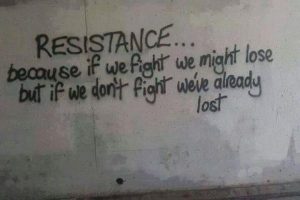 Kay Matthews, editor and writer for La Jicarita, an online magazine of environmental politics in New Mexico, reported on the excellent Dismantling the Nuclear Beast Symposium, held from December 1st through 3rd at the University of New Mexico campus.  Her article is provided below: 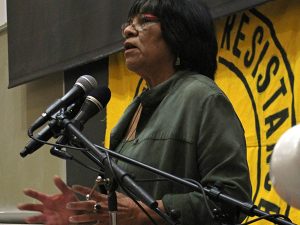 The mining and milling of uranium has hit New Mexico particularly hard. Along what is referred to as the Grants mineral belt and on the Navajo Reservation are the remnants of underground such as La Jara Mesa, Roca Honda Mine, Mount Taylor Mine, Marquez Canyon Mine, four proposed surface mines in the Churchrock/Crown Point area, and 13 abandoned mines within a five mile radius of Churchrock. The open pit Jackpile Mine at Paguate, on Laguna Pueblo, sends radioactive dust into the air, and the former mill sites of Ambrosia Lake, Kerrmac, and Homestake near Milan have contaminated the groundwater and plumes are heading towards Grants and Bluewater. On July 16, 1979, 14 weeks after the Three Mile Island radiation release, the Church Rock uranium mill tailings disposal pond breached its dam and 1,100 tons of radioactive mill waste and approximately 93 million gallons of mine effluent flowed into the Rio Puerco, through the town of Gallup, and into Arizona. The contaminated water left residues of radioactive uranium, thorium, radium, and polonium, as well as traces of metals such as cadmium, aluminum, magnesium, manganese, molybdenum, nickel, selenium, sodium, vanadium, zinc, iron, lead and high concentrations of sulfates.

A precipitous drop in uranium prices in the 1980s squelched the mining and milling boom that created this development, but the panelists at the Saturday morning symposium are still dealing with its residue and anticipating its possible rebirth if the price of uranium once again increases. Klee Benally, a Diné activist who lives in Flagstaff, told the audience that 10 million people live in close proximity to abandoned uranium mines that have yet to be cleaned up; 3,272 of those mines are located in five western states. Because uranium is classified a “hard rock” mineral, it falls under the auspices of the 1872 General Mining Act that allows mining companies to avoid responsibility for clean-up (several bills to reform the Mining Act were introduced in the 2000s but were defeated by the mining lobby).

Chris Shuey of the Southwest Research and Information Center (SRIC) explained that the Superfund program is the only law with oversight over these clean-up sites and it’s sorely inadequate; only the Environmental Protection Agency and the corporations responsible for the contamination have a seat at the table to determine the clean-up operation. The billion dollars that has been spent on settlement negotiations has addressed only 40 percent of identified mines.

Yolanda Badback, of the Ute Mountain Ute tribe of Utah, lives in a community called White Mesa that lies five miles north of the White Mesa uranium mill, the only conventional uranium mill operating in the United States today. While the mill is currently undergoing a licensing renewal, there are plans to ship clean-up waste from mines and mills that are no longer in operation to the White Mesa mill. Badback wants the mine closed: her community has to drink bottled water because of aquifer contamination. 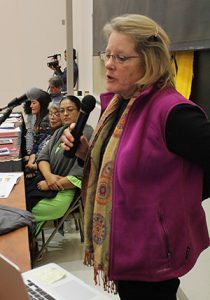 The afternoon panel consisted of activists who are engaged in the second phase of the nuclear beast: the development of nuclear weapons and nuclear waste storage. Beata Tsosie-Peña and Kathy Sanchez of Tewa Women United spoke about the impacts of Los Alamos National Laboratory (LANL), which sits on the Pajarito Plateau directly above their pueblos, on the environment, on their cultural connections, their art, and their personal lives. Myrriah Gomez, who is a UNM professor in the Honors College, spoke of her grandparents, who were part of the homesteaders community on the Pajarito Plateau forcibly removed when the Army took over the area to establish the Lab during World War II. Born and raised in El Rancho, where her family relocated, Gomez now works with both Concerned Citizens for Nuclear Safety (CCNS), and the Tularosa Basin Downwinders Consortium.

These two groups are led by powerful New Mexico women, Joni Arends and Tina Córdova. Córdova, born and raised in the small Hispano village of Tularosa, founded the Consortium in 2005 to force the U.S. government to acknowledge the impact on downwinders of the first nuclear blast test detonation at the Trinity Site near Tularosa in 1945. These “unknowing, unwilling, uncompensated, innocent victims” have suffered debilitating health defects from the radioactivity released during the bomb test. Her group has been pushing for a bill in Congress to include the Tularosa Downwinders in the Radiation Exposure Compensation Act (RECA) that covers uranium miners and workers exposed to atmospheric nuclear testing (according to Córdova, $2 billion has thus far been paid in compensation). The bill has been held up in Congress for seven years, and a recent hearing on the bill was postponed.

Joni Arends has been demanding accountability at LANL for 30 years as an opponent of the Waste Isolation Pilot Program and director of CCNS. More than 21 million cubic feet of toxic waste has been buried at LANL since 1943. Joni has done the due diligence necessary to monitor the Lab’s adherence to the Resource Conservation and Recovery Act (RCRA) that deals with the disposal of hazardous waste at LANL. Numerous violations have occurred over the years: monitoring wells designed to measure underground contamination were inadequately designed and built; chromium plumes extend from the Lab’s boundaries towards the Rio Grande. Since 2010 Joni has been working with Tina Córdova and the Tularosa Basin Downwinders Consortium to prepare a Health Impact Assessment on the downwinders. 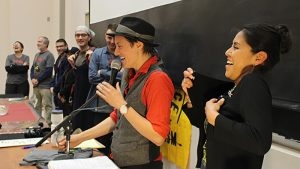 While the moderators of the symposium, Leona Morgan (Diné) and Eileen Shaughnessy (UNM professor), co-founders of the Nuclear Issues Study Group, stressed throughout the day that the gathering was not only a report on the history of the nuclear industry and the battles currently being waged to dismantle it, but also a pledge of resistance with innovative ideas on how to proceed. But the last panelist on Saturday’s schedule, Jay Coghlan of Nuclear Watch New Mexico, acknowledged the difficulties of this fight in his discussion of current political realities. LANL currently spends $1.7 billion dollars a year on nuclear weapons production; Sandia Laboratory in Albuquerque spends $1.8 billion. Kirtland Air Force Base stores 2,500 warheads on the outskirts of Albuquerque. The National Nuclear Security Administration, which manages all things nuclear under the Department of Energy, has requested a $10.2 billion budge for 2018. Our congressional delegation continues to support pit production (the plutonium core of a nuclear weapon) at LANL, development of the so-called smart weapons, the stockpile stewardship program—in other words, all things nuclear. In the meantime, poverty listings by state (including Washington D.C.) rank New anywhere from 47th to 51st.

Politically, our resistance has to debunk their rationale that these nuclear industries are the engines that drive the economy of New Mexico; all nuclear conductors should be fired and replaced with alternative energy drivers. A billion dollars spent on clean-up at both Labs and at Kirtland could provide thousands of jobs and perhaps save us from the chromium plume headed towards the Rio Grande, contamination from Sandia’s mixed waste landfill, and Kirtland’s jet fuel plume flowing beneath the streets of Albuquerque.

Signing the U.N Treaty on the Prohibition of Nuclear Weapons would be a huge step towards this goal. The indigenous people of the world, those who “have been most negatively impacted by nuclear colonialism,” are taking a leading role
in the work necessary to dismantle this nuclear beast. They are the resistance.

To view the Symposium’s presentations, go to http://www.ustream.tv/channel/nukefreenow1