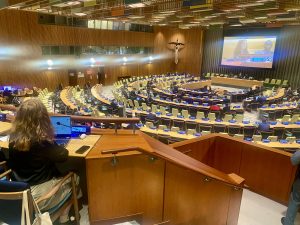 On September 26th, Molly McGinty, Associate Program Director for the International Physicians for the Prevention of Nuclear War (IPPNW), spoke at the High-Level Meeting of the International Day for the Total Elimination of Nuclear Weapons at the United Nations.  https://peaceandhealthblog.com/2022/09/28/a-broken-system-allows-nine-nations-to-hold-the-world-hostage/  McGinty said: 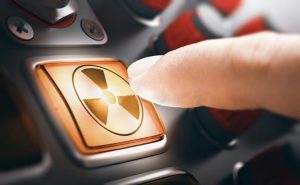 “If action is not taken, it is only a matter of time until nuclear weapons are used, whether on purpose, by accident or miscalculation.  Studies show that a nuclear war using less than 3% of the world’s nuclear weapons could kill up to every 3rd person on earth.  A full-scale nuclear war between Russia and the United States would threaten human survival. 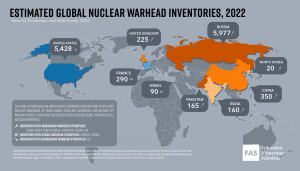 “Despite their empty promises, all nine nuclear weapon states are enhancing, modernizing, and increasing their nuclear arsenals.  These deadly investments take precious resources away from addressing the other existential threat to our future: the climate crisis.  Climate justice cannot be reached while nuclear weapons continue to plague our planet.

“Recent nuclear threats are a symptom of a broken system which allows nine nations to hold the world hostage with their genocidal weapons. We call on all nations to condemn all threats to use nuclear weapons. But condemnation is not enough. The only way we can step back from the brink of disaster is by eliminating these weapons. 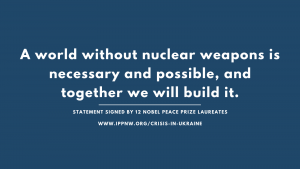 “A world without nuclear weapons is possible.

“A new generation of changemakers — many of whom are witnessing the climate crisis first hand — are waking up to the shocking reality of our global nuclear architecture for the first time.  We demand action be taken before our future is ripped out from under our feet.  We reject the complacency of nuclear-armed states and their allies, and thank those who have paved the path to abolition.

“The abolition of nuclear weapons is not an abstract goal.  The Treaty on the Prohibition of Nuclear Weapons [TPNW] was adopted by this UN General Assembly in 2017 and held its first Meeting of States Parties earlier this year in Vienna. With the landmark Vienna Declaration and a growing number of supportive states, the TPNW is a beacon of hope in an otherwise bleak landscape.

“As the threat of nuclear war grows, so does the global opposition to nuclear weapons.  In response to Russia’s invasion of Ukraine, one million people worldwide signed IPPNW’s petition with 16 Nobel Peace Prize Laureates calling on Russia and NATO to renounce any use of nuclear weapons in this conflict and urging all countries to support the TPNW.

“While nuclear sabers are rattling, I stand with the support of over one million individuals and once again urge Russia and NATO to use the 77th General Assembly to heed our call and renounce the use of nuclear weapons.  To the Member States who have not signed or ratified the TPNW:  do not delay your support until it is too late. 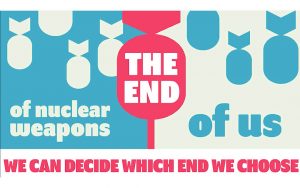 “The time for rhetoric is over. If we survive this moment, we must learn from our worldwide near-death experience and never again find ourselves on the edge of a precipice of our own making.