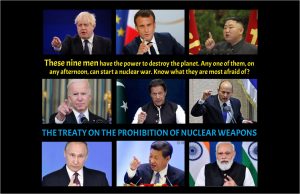 Last week we quoted Cynthia Lazaroff, founder of Women Transforming Our Nuclear Legacy https://www.nuclearwakeupcall.earth/women-s-project , about the nuclear dangers in Ukraine and her call to come forward that “Our work is more important now than ever.”  http://nuclearactive.org/war-in-ukraine-creates-a-planetary-nuclear-wake-up-call/  Her presentation is available AT https://www.youtube.com/watch?v=ZVfiLYGOLcM. 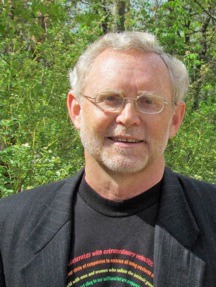 This week we quote the call to come forward from Ralph Hutchison, Coordinator of the Oak Ridge Environmental Peace Alliance, to all those working for the Nuclear Weapons Ban Treaty, that this is our time.  https://orepa.org/

Hutchinson begins, “This is our moment.  If we just continue with business as usual, we are crazy.  This is the time to act, and by that I mean more than clicking through to sign a petition. Here’s why I am being so dramatic:

“The last time people in the United States were this concerned about nuclear weapons was November 21, 1983.  That was the day after The Day After, [an ABC television film that more than 100 million people watched.]  https://reelgood.com/movie/the-day-after-1983

“Vladimir Putin’s threat to use nuclear weapons has done what decades of Doomsday Clock announcements https://thebulletin.org/doomsday-clock/ and editorials by the Four Horsemen [George P. Shultz, William J. Perry, Henry A. Kissinger and Sam Nunn] in the Wall Street Journal have not been able to do.  2007 –  A World Free of Nuclear Weapons https://www.wsj.com/articles/SB116787515251566636 ; 2008 – Toward a Nuclear-Free World https://www.wsj.com/articles/SB120036422673589947 ; 2011 – Four Horsemen of the Nuclear Apocalypse (Eben Harrell, Time) https://science.time.com/2011/03/10/the-four-horsemen-of-the-nuclear-apocolypse/ 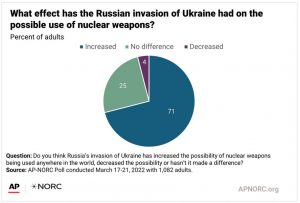 “The Associated Press-NORC Center for Public Affairs poll in the third week of March found 75% of people in the United States are Extremely/Very Concerned (45%) or Somewhat Concerned (30%) that Russia will use nuclear weapons against the United States.  https://apnorc.org/projects/concerns-about-nuclear-weapons/

“For at least the last thirty years of my work on nuclear abolition it has been clear that people did not care, really, about the nuclear threat. At budget time, the weaponeers and defense contractors flew comfortably under the radar. Nuclear watchdogs barked every year about the indefensible and dangerous increases in nuclear weapons spending—the media yawned and the few people in Congress who agreed with us were hopelessly outnumbered.

“Our rhetoric rose and our organizing efforts increased when the government announced its multi-trillion dollar plan to modernize the nuclear stockpile, everything from new bomb plants to new bombs to new delivery systems. From the media, mostly crickets.  Certainly not the kind of reporting that would awaken people to the nuclear threat.   Even people who understood the threat (even me, sometimes) did not feel it.  It might have been intellectually true, but it wasn’t emotionally true. 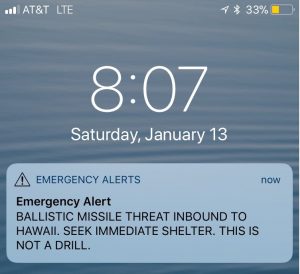 “’Nuclear weapons just aren’t on the table,’ was our common refrain. It was true, it was depressing, and we worried about what it would take to put them on the table — a catastrophe?  The media wrote a few stories, over a couple of months, when Hawai’i was awakened by a text blast that a nuclear missile would arrive in a matter of minutes.  In the end, though, Hawai’i is not the mainland.  Whatever emotional fallout Hawai’ians might still be dealing with is not something we felt.  https://en.wikipedia.org/wiki/2018_Hawaii_false_missile_alert

“So I repeat: This is our moment. If we just continue with business as usual, we are crazy. This is the time to act. 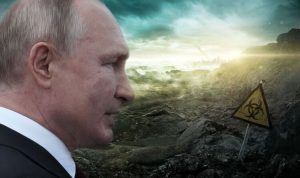 “People are hungry for knowledge and they are hungry for an answer. If we believe what we have been saying, that the Treaty on the Prohibition of Nuclear Weapons is the only pathway to disarmament, we need to be proclaiming that from the rooftops and in the streets, to the public, to the media, and to the politicians.  https://www.un.org/disarmament/wmd/nuclear/tpnw/

“In that order. We should validate the legitimate fears of people who are feeling the nuclear threat—we don’t have to hype anything, we just have to tell the truth.

“We should demand the media get honest about the big picture—the one that includes not only policy and military debates, but the humanitarian and environmental costs of nuclear weapons, the one that includes the reality of the [Treaty on the Prohibition of Nuclear Weapons] TPNW, the rest of the world’s answer to the nuclear threat.

“Finally, we get to the politicians, who must be hoping and praying, along with their defense contractor benefactors, that this moment passes before they are called on to actually defy the now exposed conventional wisdom that nuclear weapons make us safe.  I put them last, because if we go to them now, they can still just nod and say thanks for coming.  But if the public is riled up, they have to come up with some answer.  And we can’t let it be what they want to do — double down on nuclear weapons.  We have to make the case to the public and in the media, before we call them to account. 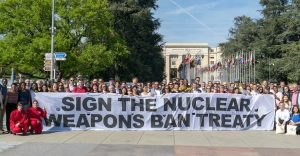 “I envision everyone working together, using every contribution of every group and individual, setting aside ego, at least for this brief window, to make this happen.

“I think we can figure out some realistic, powerful, effective actions to take in the next three weeks and three months.  We can use the network we have already built, we can use social media, we can use the amazing tools that are out there to reach out to faith communities, Rotary clubs, the League of Women Voters, as well as activate our networks—[Women’s International League for Peace and Freedom] (WILPF) https://www.wilpf.org/ , Veterans for Peace https://www.veteransforpeace.org/ , [Physicians for Social Responsibility] (PSR) https://www.psr.org/ ….

“We are literally sitting on a world-changing community that has the power to make this moment the turning point, at long last.  We need to get up, get busy, and turn loose that power.