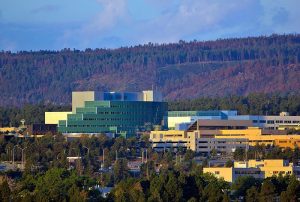 Los Alamos National Laboratory (LANL) is set to receive a 32.5% increase in funding for the Department of Energy (DOE) in the proposed fiscal year 2021 federal budget.  Nearly half of the new $1.5 billion would be spent on “plutonium modernization” so that LANL could manufacture up to 30 plutonium pits, or triggers for nuclear weapons, per year. An additional $618.5 million is slated for LANL’s contribution to 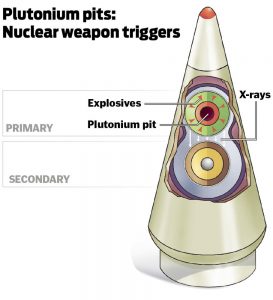 plutonium modernization at the Savannah River Site.  DOE wants to “repurpose” the failed MOX Fuel Fabrication Facility into the Savannah River Plutonium Processing Facility for the production of 50 pits per year.  https://srswatch.org/boom-goes-the-budget-as-doe-plans-for-nuclear-war-4-6-billion-target-for-unjustified-plutonium-bomb-plant-pbp-at-r/

DOE is asking for $19.8 billion for modernization, a number that some officials are calling “the right number.”

At the same time, the fiscal year 2021 budget proposal cuts funding for environmental cleanup at LANL from $220 million to $120 million. LANL’s legacy waste, from before 1999, dates back to the Manhattan Project and the Cold War.

Few details are available about how the two labs might gear up for plutonium pit production. However, the increasing funds for pit production and the reduction of funds for cleanup points dramatically towards a significant shift of focus for the national labs. The emphasis on building plutonium pits for nuclear weapons and providing an infrastructure to support them diminishes the funds available for protecting drinking water supplies, restoring the Pajarito Plateau to the place it was before LANL began in 1943 – where people lived and built community.

All of the proposed plans require National Environmental Policy Act, or NEPA, public processes.  The current administration is working to destroy the law that went into effect on January 1, 1970, the same year as the first Earth Day 50 years ago.  NEPA requires analysis of the environmental impacts before any major federal action begins, with full public review and comment.

By contrast, at the Savannah River Site, DOE determined that they would follow NEPA.

It is important to make our voices heard.  We are locals and are the stewards of our environment.  We must let our Senators and Congressman know our opinions about the proposed increase in weapons-related funding as well as about the reduction in funds for environmental cleanup.  CCNS has prepared a petition requesting them to demand that the required environmental impact statements be prepared before any major federal action, including commitment of funding, takes place.

To get involved, please download the petition, gather signatures, and join us on Tuesday, March 10th in downtown Santa Fe to deliver the petition signatures to the offices of the Senators and Congressman.  Next week, we’ll have more details about time and place.  Together we are making a difference!  Petition-EIS for LANL Pit Production 2-20-20

The scientists recommend: “people staying home sick from work or school.  In the US we tend to be workaholics, but if people can stay home and avoid exposing others, we can significantly reduce disease spread.”  Jeanne Fair, LANL Deputy Group Leader for Biosecurity & Public Health. “Just really wash your hands throughout the day.”  Sara Del Valle, deputy group leader for LANL’s Information Systems and Modeling Group

For those in the Santa Fe area interested in donating gift cards and silent auction items for the benefit, please contact Joni Arends at CCNS at 505 986-1973.  Thank you!

b.Wednesday, March 11th, comments due to NM Environment Department about the groundwater discharge permit for URENCO – a uranium enrichment facility located in Eunice, NM – near the NM/TX border.  Stay tuned for next week’s Update for a fact sheet and sample public comment letter you can use.

c.Comments now due to EPA about the LANL industrial “waste” water discharge permit and individual stormwater permit on Tuesday, March 31st.  Stay tuned for sample fact sheets and public comment letters you can use.