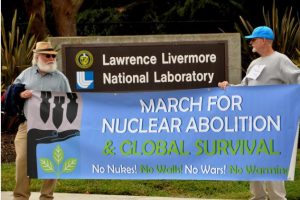 Members from more than three-dozen Tri-Valley, Tracy and Bay Area peace, justice and environmental organizations and communities of faith invited the Lawrence Livermore National Laboratory Director to join them at the West Gate to discuss the new Treaty on the Prohibition of Nuclear Weapons.  The activists visited the Livermore Lab Main Site on Wednesday, August 9th to commemorate the victims of the U.S. bombing of Nagasaki, Japan with an atomic bomb on that day in 1945.  It was the second U.S. wartime bombing; the first was on Hiroshima, Japan on August 6th. 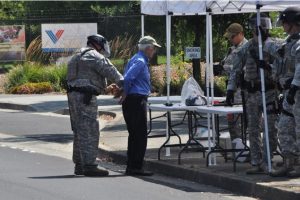 A new global majority took the steps necessary to establish an important new law and a new global norm.  The treaty prohibits the development, testing, production, manufacture, acquisition, possession or stockpiling of nuclear weapons, which is exactly what the Livermore Lab does. 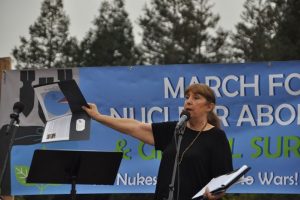 In fact, 88.5 percent, or over $1,230,000,000, of Livermore’s budget request for fiscal year 2018 is for nuclear weapons activities.  http://www.trivalleycares.org/new/FY2018_LLNL_Budget_Request_PieChart.pdf  These activities include developing a new W80-4 warhead for a new Long-Range Stand Off weapon and the new Interoperable Warhead-1.

Anticipating resistance from the Lab to meet, the activists acknowledged that national policies and behaviors do change over time.  They cited how South Africa, after coming under global pressure, dismantled its apartheid systems and rose in stature in the world.  They wrote, “So, too, may the U.S. and other nuclear weapons states accede to the treaty and come into compliance at a not-too-distant date.”

The Lab Director, William Goldstein, replied to the invitation saying he respectfully declined.  He wrote, “This topic is best discussed with the U.S. Government representatives at the UN.” 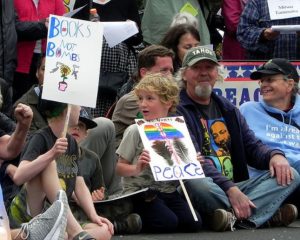 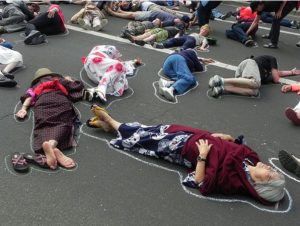 Marylia Kelley, of Tri-Valley Communities Against a Radioactive Environment, or Tri-Valley CARES, replied that the UN is not the sole forum for discussing U.S. nuclear weapons policy and disarmament obligations.  She wrote, “Livermore Lab is a proper and necessary forum to discuss nuclear disarmament in general and the implications of the Treaty on the Prohibition of Nuclear Weapons in particular.  Indeed, the nuclear weapons activities that Livermore Lab conducts at its Main Site in Livermore … make it not merely an appropriate location but an imperative location for this discussion.”  http://trivalleycares.org/

About 200 people attended the commemoration event, which was filled with speakers, poetry, music, and a die-in at the West Gate.  Forty-seven were arrested and given a court date of September 11th, 2017.